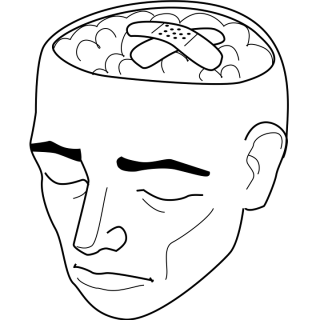 When my grandmother died, I found some papers from the 1940s from a psychiatric institution, along with a few letters. I asked my uncle about it. He told me that my grandmother’s sister had been hospitalized, and then died from a lobotomy. My grandmother felt guilty. She was the one who authorized the procedure, so she never talked about it. He added, in my grandmother’s defense, that my great aunt had been “out of control,” so there was “nothing else to do.” I’m not sure what constituted “out of control.” The only example I was given was that she would take off her clothes and run outside, which of course mortified my family.

This information haunted me for a few reasons. At the time I had several family members, still alive, who struggled with serious mental illness. Yet this was the first documented evidence I discovered about it. It was all around us but never discussed. We no longer lived in a time where lobotomies were considered an option, but the stigma around admitting something was wrong had remained. As much as I wanted them to get help, there was no way they were going to do it.

I found my great aunt’s death certificate. She had mixed-type Schizophrenia and had been hospitalized for over a year before they performed a prefrontal lobotomy. Known as the “ice pick” lobotomy first practiced by Dr. Walter Freeman, the procedure had gained popularity at the time because schizophrenics put into a vegetative state were easier to handle in the hospital. Swelling from the procedure killed her two weeks later. Incidentally, the institution she was in was less than two hours from where the notorious Dr. Walter Freeman had been based. It’s likely he performed the procedure or trained the doctor who did. It was known that up to a third of the patients who underwent the procedure would not survive.

My mother mentioned once that my grandmother “might have been depressed.” My grandmother spent the last 35 years of her life in the same chair, complaining about the same people, on a sad loop. She was solely focused on herself and her problems, incapable of tuning in to the people around her. The most positive statement I had ever heard her say was to describe someone as “not half bad.” Saying she might have been depressed is like saying the Grand Canyon might be a big hole. What might her life have looked like if she had opened up? Was there a time when she was younger where she might have taken a different path? I see myself in her. To me, my grandmother represents what could happen if I don’t face my own pain and grief. I am reminded that as hard as it is to drag my problems into the light, it is better than sitting on them, in the same chair, for the next fifty years.

I have struggled to get people in my family to admit their mental illness for the sake of seeking treatment. Around the time that I found my grandmother’s “secret” I was researching 72 hour holds for psychiatric evaluation for someone in my family who had been diagnosed with a similar condition as my great aunt. He rejected the diagnosis. He was having an intense psychotic episode, and I hoped that a hold would mean he would take his meds and maybe have a moment of clarity to admit he needed more help. But here lies the problem with trying to help people with mental illness. Only sane people question if they’re crazy. Add a ton of family secrets, dysfunction, enabling, and abusive behavior to the mix, and you’ve got an impossible case.

I recently had a DNA test done and was matched online to some cousins whom I had never met before. One of them was the 95 year old goddaughter of my great-grandfather, and the other one was quite the family genealogist.  The older woman remembered my grandmother as a child and gave me a few snippets about life in their small town in the 1920’s and 1930’s. I wanted to know what my grandmother was really like, but all she could offer was that “she was nice.” I also wanted to know what they knew about mental illness in our family. But how to approach the subject? Then my great aunt was mentioned, and what a “shame” it was that she died. She remembered my great aunt as “normal.” She had gone to college, worked as a social worker, and was young (39) when she died. According to my genealogist cousin, the evidence of mental illness in the family goes back pretty far, including someone who had died from “Nervous Prostration” in 1880. And also, neither of us can digest gluten or green bell peppers.

It fascinates me, these layers of history, genetics, and behavior. There is so much denial in my immediate family, it makes me feel less alone to have some evidence of a pattern and a history which extends beyond my personal experience. I have struggled with depression and anxiety at times, and having some facts and history helps give context to my own struggles as well as the bigger picture. I consider myself extremely fortunate to have access to the support I need when I need it, I only wish other people in my family could have the same.